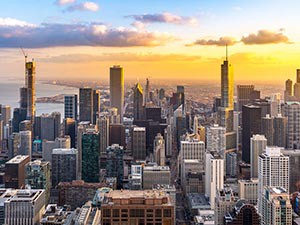 Cook County Assessor Fritz Kaegi has not given up on efforts to pass legislation requiring some commercial property owners to submit information about building income to the assessor’s office, which he has called “the first, best step in legislative tax reform.”

The so-called Data Modernization Bill passed the Illinois Senate earlier this year, but was shelved by a House committee amid opposition from groups that include the Building Owners and Managers Association of Chicago, the Illinois Retail Merchants Association and the Chicagoland Chamber of Commerce, among others. Opponents say the bill would impose burdensome reporting requirements and includes information that is confidential.

If passed, the bill would require owners of commercial properties assessed at more than $100,000 to submit income and expense data to the Cook County Assessor’s Office to help provide a more accurate picture for tax assessment. Despite the concerns from some business owners, the bill has garnered support from other members of the business community, including Brookfield Properties’ Retail Group and the Cook County Board of Commissioners.

Kaegi will discuss the bill, among other reforms he is pursuing, at a series of town hall meetings. The next meeting is scheduled for 7 p.m. Oct. 10 at Stickney Village Hall, 6533 West Pershing Road. Kaegi will address details of the legislation and offer attendees the opportunity to raise concerns or questions. The meeting will be co-hosted by State Reps. Celina Villanueva and Chris Welch.

Another town hall meeting, to be co-hosted by State Rep. Kelly Cassidy and State Sen. Heather Steans is planned for St. Andrews Greek Church, but has not yet been scheduled.

Kaegi, who campaigned on a platform of increased transparency, says SB 1379 will help create a more accurate picture of a commercial building’s value as part of the bigger effort to reform a system found to impose a disproportionate share of the tax burden on lower-income property owners. For homeowners, the bill is seen as a step toward shifting a greater share of the tax burden onto commercial properties.

A study by the University of Chicago found that regressive assessments between 2011 and 2015 had caused over $800 million in taxes to shift to lower income homeowners.

In February 2018, Crain’s Chicago Business reported that some of the city’s most iconic commercial buildings may have been significantly undervalued. Results showed an average difference of about 46% between taxable value and selling price.

The Data Modernization bill passed the Illinois Senate in a bipartisan vote of 36-16-1 in April, but faced significant opposition in the House. In May, the House informed the Cook County Assessor’s Office that SB 1379 would not move forward for a vote before the next legislative session.

According to Kaegi, the bill has strong support from 39 House co-sponsors and 73 county and state businesses, school districts, labor groups and community organizations, and elected officials.

If you believe you may be paying too much in property taxes, contact us for a free, no-obligation analysis of your tax bill. At Kensington, we have decades of experience acting as advocates for Chicago area taxpayers. We use a proprietary algorithm and the most up-to-date data available to make the strongest possible case for appealing your assessment.

Appealing your assessment is the only way to ensure that you are not paying too much in property taxes. If you use our services to help assist with an appeal, you pay nothing unless you win. Our clients usually win. We don’t undertake any appeals unless we see an opportunity for a significant reduction.

Find out today how much you could be saving on your tax bill.

GET YOUR FREE ESTIMATE TODAY